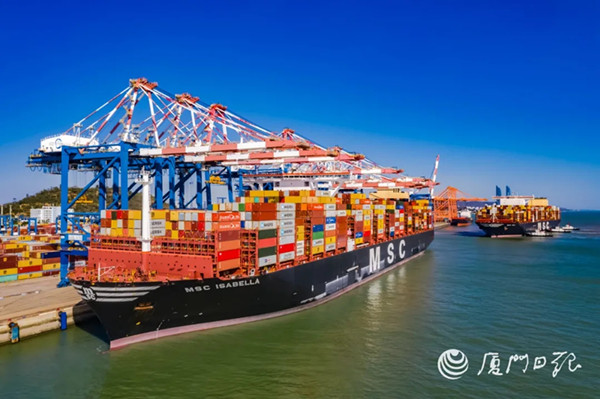 A container ship from Songkhla Port, Thailand arrived at the port of Xiamen in East China's Fujian province on Dec 2, marking the official opening of the shipping route between the two ports, according to a local news report.

The new shipping route, which is the 32nd linking Xiamen and Southeast Asia, is expected to give a boost to the development of the Belt and Road Initiative (BRI).

The ship, which is transporting 300 twenty-foot equivalent units (TEUs) of cargo, will travel along BRI routes, such as Cambodia's seaport of Sihanoukville and Thailand's Songkhla Port, and return to Xiamen within three weeks.

According to a manager of the shipping company RCL Group, the opening of the new route was due to the world-leading business environment of the Xiamen Port and its status as a key shipping logistics hub along the BRI routes.

The new route will further strengthen Xiamen's role as a key port city in the 21st Century Maritime Silk Road and the Silk Road Economic Belt, according to a local official.

Xiamen has made great efforts to support the development of the container business, with its container throughput exceeding 1.85 million TEUs between January and November, a 1.06 percent year-on-year increase despite the global COVID-19 pandemic.