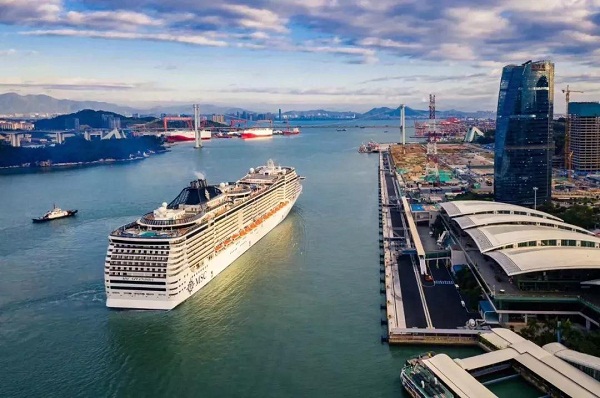 Berth No 1, 2, and 3 at Xiamen International Cruise Terminal passed the provincial-level acceptance check administered by Fujian province and were officially put into use on Aug 26.

The opening of the three provincial-level berths will further enhance the terminal's appeal as a home port base for international cruise ships, speed up the construction of a large international cruise center along the southeast coast, facilitate trade between Xiamen and Taiwan, as well as deepen cross-Straits exchanges and cooperation.

Early in March, the three berths at the terminal passed the municipal-level acceptance check and began to undertake freights from and to Taiwan, which used to be transported to Tongyi Wharf.

Statistics showed that the No 3 Berth has loaded and unloaded 10 cargo ships from and to Taiwan as of Aug 25, with a total of 97  twenty-foot equivalent units, and 1,812 tons of fruit and frozen fish.

Xiamen International Cruise Terminal covers a total coastline of 1,418 meters, with four berths, including one for 150,000-ton ships, two for 80,000-ton ship, and one for 3,000-ton ships for passengers and cargo roll-on ships, which can dock the world's largest cruise ship at 225,000 tons or three medium and large-size cruise ships at the same time.