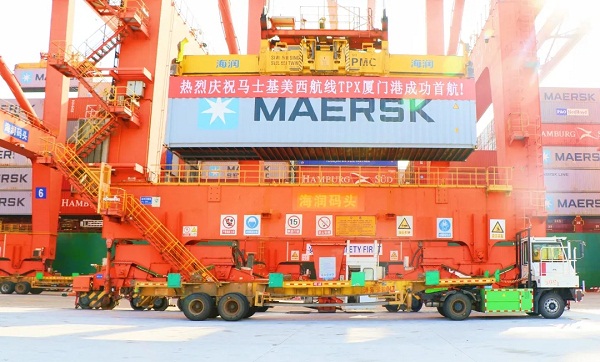 The Balthasar Schulte ship that berthed at Xiamen Hairun container terminal at Xiamen Port in Xiamen, Fujian province on Jan 12 finalized the successful opening of of a second new shipping route at Xiamen Port this year.

The TPX new shipping route is independently operated by Maersk, which is a strategic partner of Xiamen Port Holding Group Co that connects shipping routes between Xiamen, Yantian, and Ningbo with Haiphong in Vietnam, and Los Angeles in the United States.

The new shipping route is expected to transport about 3,000 twenty-foot equivalent units of containers to Hairun container terminal per week, according to officials at the terminal. The Balthasar Schulte ship has already transported 4,163 TEUs during its first shipment to Xiamen Port this year.

The Xiamen Port Holding Group Co will make full use of the port's location and seize the opportunities put forth by the Regional Comprehensive Economic Partnership agreement that has been implemented to optimize the layout of shipping routes and improve service ability to improve the business environment at Xiamen Port.